Elizabeth Grinton taught elementary grades in Wilkes County upon graduating from Winston-Salem and Columbia University. She even taught at her former school, Lincoln Heights. 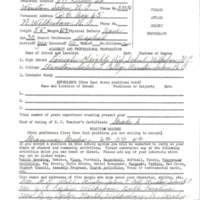 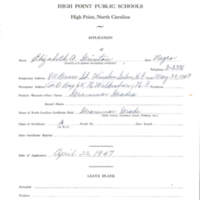 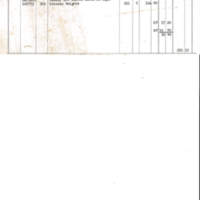 A paystub from Lincoln Heights to Elizabeth Grinton.

After 31 years of teaching, Mrs. Grinton retired in 1977. However, Mrs. Grinton did not let her retirement stop her from being involved with her community.  She helped develop a daycare for developmentally challenged youth in 1996, the U-Can Charter School, aided in numerous programs through her church, and continuously worked on establishing Lincoln Heights as a community center for the residents of Wilkes County.2 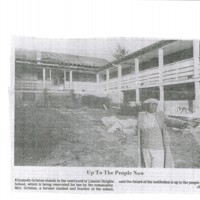 Elizabeth Grinton standing in front of Lincoln Heights after its closure. 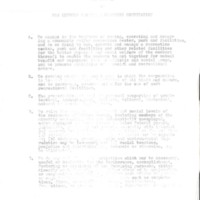 A list of objectives from the Lincoln Heights Recreation Corporation. 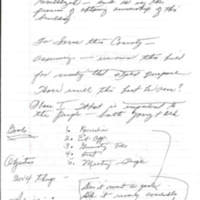 Meeting notes on the future of Lincoln Heights. 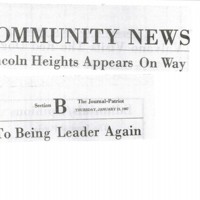 This newspaper article, dated January 15, 1987 features several quotes from Elizabeth Grinton on her intentions for fixing up Lincoln Heights. 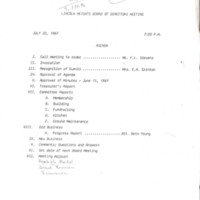 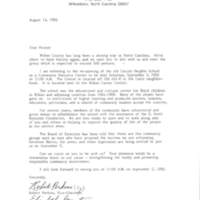 An announcement and invitation on the re-opening of Lincoln Heights School as a community center, dated August 14, 1992. 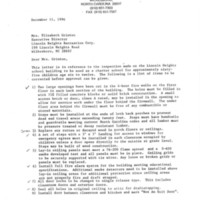 The love the community felt for Mrs. Grinton is exemplified through numerous thank you letters and cards sent to her by students she led programs for even after her retirement. In June of 1978, Elizabeth Grinton and five other retired teachers (Mrs. Mozelle, Mrs. Faye Davis, Mr. James E. Switzer, Mrs. Allene Switzer, and Mrs. Marian Osborne) were honored by the Board of Education for their service to education in Wilkes County. Furthermore, On June 24, 1979, Mrs. Grinton was awarded the Wilkes County Citizens award due to all of her work with her church, Lincoln Heights, her students, and her project with the Barber Family Roots Reunion.3

In 1995, President Clinton awarded Mrs. Grinton with the Presidential Service Award for Exemplary Volunteer Service for her work with Habitat for Humanity. Two years later, Mrs. Grinton was an honored speaker at Appalachian State University's 1997 commencement ceremony where she was awarded the Dougherty Medal of Honor for her service to teaching, volunteering, and due to her extensive work with the Wilkesboro community. Mrs. Grinton was quoted as saying, "One must not be afraid to give themselves to the service of life. That's the lesson which I hoped to open for those young people at the graduation ceremonies. I told them to choose something to pour themselves into. It doesn't matter what, just please choose now. Don't lose that opportunity. I tried to give them something they might hang onto so that someday they might realize that life is worth it."

Elizabeth Grinton was truly a monumental figure in the Cairo Community of Wilkesboro. Throughout her life she touched many with her relentless passion for teaching and volunteering. In 1997, Mrs. Grinton was quoted as saying, "As a teacher, I learned children want something to emulate. It's our job as adults to provide that for them. That's one reason I will volunteer as long as I can." Thanks to her, the history and importance of Lincoln Heights can be told for generations to come.4

A newspaper article featuring a story on Elizabeth Grinton and five other retired teachers from Wilkes County. The teachers were honored by the Board of Education in 1978. 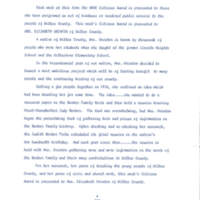 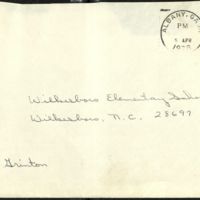 A letter from student, Robert Starling to Mrs. Grinton. 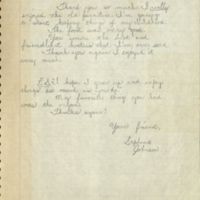 A thank you card from student, Stephanie Johnson. 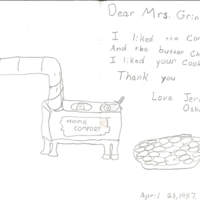 A thank you card from student, Jeremiah Osborne. 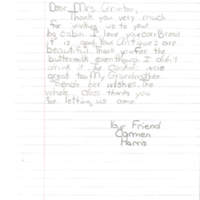 A thank you card from student, Carmen Harris. 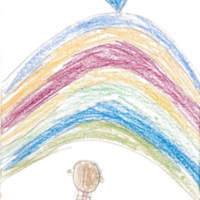 A colorful thank you card sent to Mrs. Grinton.

[4] Jim Sparks, “True To Life; Wilkes Women Tries To Instill In Others Desire To Do Their Best: City Edition.”